A double Kindle Daily Deal on

Not 1, not 2, but THREE starred reviews!

*”Spencer is a storyteller of impressive flair.” Booklist

Check out the new cover for NOTORIOUS!

Drusilla Clare is full of opinions about why a woman shouldn’t marry. But that doesn’t stop the rush of desire she feels each time her best friend’s brother, notorious rake Gabriel Marlington, crosses her path. So imagine her dismay when she finds herself in the clutches of a scoundrel, only to be rescued by Gabriel himself.  And when Gabriel’s heartless—and heart-pounding—proposal comes, it’s enough to make Dru’s formidable resolve crumble . . .

She’s sharp-tongued, exasperating—and due to one careless moment—about to become his wife. Still, something about Drusilla has Gabriel intrigued. First there’s the delicious flush of her skin every time she delivers a barb—and then the surprisingly sensual feel of her in his arms. Gabriel even finds himself challenged by her unusual philosophies. And when he discovers a clandestine rival for Dru’s affection, his temperature flares even hotter. But the real threat to their happiness is one neither of the newlyweds sees coming. If they’re to save their future—and their very lives—they’ll need to trust in each other and their growing love.

Cover Reveal for THE ARRANGEMENT !

tell me your FAVORITE HOLIDAY in the comment area below!

Giveaway is for United States only.

The winner of GIVEAWAY #1 a signed copy of Vanessa Kelly’s THREE WEEKS WITH A PRINCESS is Tiffany T.

The winner of GIVEAWAY #2  a cloth SCANDALOUS tote bag is, Cyndi B.

The winner of a print copy of Shana Galen’s THE THIRD SON IS THE CHARM is Joanna C.

Thanks to everyone who entered! I’ll have more giveaways in my next newsletter.

JANUARY’S NEWSLETTER PRIZE WINNERS HAVE BEEN CHOSEN AND THE GIVEAWAYS ARE CLOSED AND THE WINNERS ARE:

The winner of GIVEAWAY #1 a signed copy of Vanessa Kelly’s THREE WEEKS WITH A PRINCESS is Tiffany T.

The winner of GIVEAWAY #2  a cloth SCANDALOUS tote bag is, Cyndi B.

The winner of a print copy of Shana Galen’s THE THIRD SON IS THE CHARM is Joanna C.

Thanks to everyone who entered! I’ll have more giveaways in my next newsletter.

Three Weeks With A Princess

(along with some really cool swag–all SIGNED by the author!!)

just leave a comment below telling me the name of your favorite movie of ALL TIME.

Giveaway #2
To celebrate the cover reveal for SCANDALOUS (now on pre-order)
I’m giving away a custom tote bag!

All you have to do is answer the same question as in Giveaway #1 and you’ll be entered to win.

Yes!! I have MORE historical romance!
I’ve got a print copy of Shana Galen’s THE THIRD SON’S THE CHARM just waiting to wing its way to one lucky reader’s home! 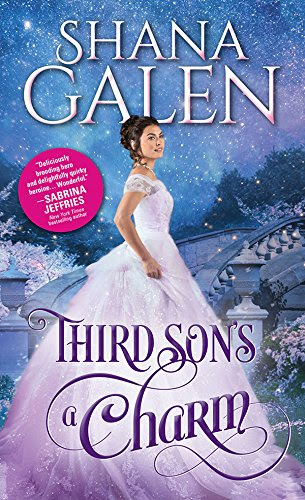 Again, one entry is good for all three GIVEAWAYS!

Hello all you wonderful historical romance readers! This is just a last reminder that I will be drawing a name tomorrow for the Big-Bucket-O-Prizes Giveaway.

I’ll notify the winner first and then post their FIRST name and state on the website once I’ve received their permission to do so.

There is no purchase necessary, all you have to do is sign up for my newsletter. One entry will qualify you for all subsequent giveaways, so you’ll never have to worry about being left-out if you don’t hear about a giveaway.

If you have concerns about your inbox being bombarded, I should probably confess I haven’t actually sent out a newsletter yet…. So, I probably won’t be pestering you often.

And I’ll make this promise right now: If/when I send out a newsletter, it will always include either a giveaway, a snippet, or some other no-purchase-necessary goody.

A full list of prizes, along with photos, is on the Giveaways! page

An excerpt from INFAMOUS ….